This appetizer recipe for Hot Chipped Beef dip is warm and delicious. It’s sort of like a cheese ball, only it’s served out on a platter, warm.

Directions: Combine all ingredients (minus the walnuts). Put in a small casserole dish. Top with chopped walnuts. Bake at 350 for 15 minutes. Serve with large Fritos. 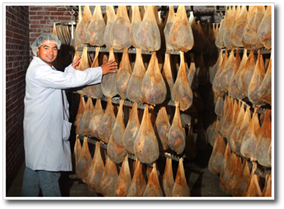 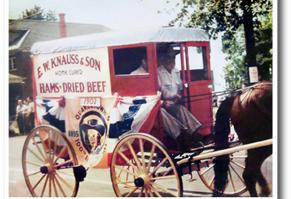 From the humble beginning of starting out as a small butcher shop operation in Quakertown, Pennsylvania to growing into the largest manufacturer of dried beef products in the world, Knauss Dried Beef certainly has had a successful 113-year-old history.

The Knauss dried beef story began in 1902 when Edward W. Knauss started a small meat market operation specializing in slowly cured and smoked meats. Going door to door in Quakertown as well as areas just north in the Lehigh Valley, his initial sales were from ham, bacon, hot dogs, and of course dried beef. The popularity of E.W. Knauss smoked meats started to gain momentum but it was E.W. Knauss’ dried beef which would soon prove to be the most popular item.

As the business grew, it became apparent that a larger USDA inspected facility would be needed. Just along the railroad tracks in the heart of Quakertown, sat the much needed facility that would become the official home to Knauss dried beef. Housed with a large production floor, old-fashioned brick ovens and a spacious packaging room, the Broad Street manufacturing plant would be able to handle the substantial increase in production.

For five generations and for over 100 years, the business would remain family owned and became repositioned to specialize in dried beef. In 1921 Edward W. Knauss turned over the role of president to his son William E., who was then succeeded by Donald Knauss as new company president in 1947. Donald’s son E. William followed in 1968 and then finally handed down operations to the fifth generation Knauss to run the company, Troy Knauss.

Regardless of which Knauss family member was at the helm, the vision was clear–to produce only the finest dried beef products in the marketplace at a fair and competitive price. While there were a couple of other meat snack products introduced by the Knauss family over the years, dried beef stood the test of time and continued to be made with the original family recipe.

Through the latter years of ownership, Knauss acquired L. Foulke & Son, the Andrews Dried Beef Co. and Philadelphia’s Carson’s Packing Co., which traced its beginning to 1888.

In 2004, the family decided to sell off the dried beef portion of the business and E.W. Knauss was acquired by Alderfer, Inc. of Harleysville, PA. The sale to Alderfer, Inc. included the Andrew’s, Carson’s and Knauss dried beef brands of the business. For several years, the various brands of Knauss produced dried beef products continued its success in the marketplace. The brand’s growth could be contributed to the three pivotal acquisitions, facility upgrades and expansions, extensions of the distribution territory, and development of customer base.

In 2011, Alderfer, Inc, sold the business to Paul J. Kozloff, a seasoned executive with many years of experience in distribution and manufacturing. The newly formed company “Knauss Foods, Inc” vowed to continue to serve the dried beef market and still produces several different dried beef products to retailers, food service distributors and food manufacturers throughout the United States.

Today, Knauss Foods, Inc. still operates out of the original Knauss manufacturing facility and uses the original 113-year-old recipe, slowly curing and air drying it’s authentic Knauss Dried Beef.Knauss Foods takes pride in producing the finest quality dried beef, which was established by EW Knauss and Son. While keeping that tradition alive, Knauss Foods looks towards the future, adding new products, the continuation of producing our one-of-a-kind dried beef and keeping the satisfaction of our customers as our number one goal.